It is commonly known that some wealthy people collect art, but did you know Mandarin dresses could be collectors’ items, too? Since the making of Mandarin dresses is quite an art, some people in today’s China do collect exquisite Mandarin dresses once in the possession of past celebrities. One of the Mandarin dress collectors is Ms. Song Luxia (Song is her family name according to the surname-first Chinese tradition), a Chinese historian living in Shanghai.

In Ms. Song’s collection, there are three Mandarin dresses that once belonged to Madame Chiang Kai-Shek (1898-2003), China’s most memorable first lady.

One of Madame Chiang’s three dresses in the collection is shown above. With a subtle floral pattern, it’s understated and elegant.

Here is a Mandarin dress also with a colorful floral pattern on a deep blue background, but the impressionistic floral print looks more youthful.

Madame Chiang had an almost equally famous brother, T.V. Soong(1894-1971), who was once China’s prime minister. His wife Laura (1907-1988) always accompanied him on international trips as well as at formal dinner banquets. She dressed just as impeccably as her sister-in-law Madame Chiang, but appeared to prefer fancier styles. 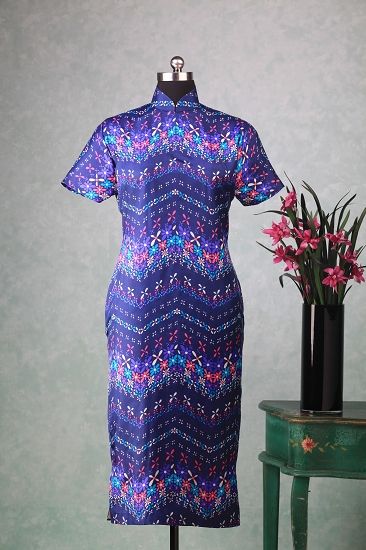 Blush is a very flattering shade of pink, which can bring a rosy tone to your cheeks. Here is a blush silk Mandarin dress of our times.

Though without beading, this dress comes with some white embroidery that looks somewhat similar to tiny pearl beads. There is a subtly bridal feel about the dress, making it ideal for engagement photo shooting. For those already married, it would work perfectly at a wedding anniversary celebration.

Speaking of weddings, let’s look at the most impressive wedding photo of 1929.

The glamorous bride in the photo, Juliana Young Koo, is still alive! Most amazingly, she was dancing at her 109th birthday party last fall! 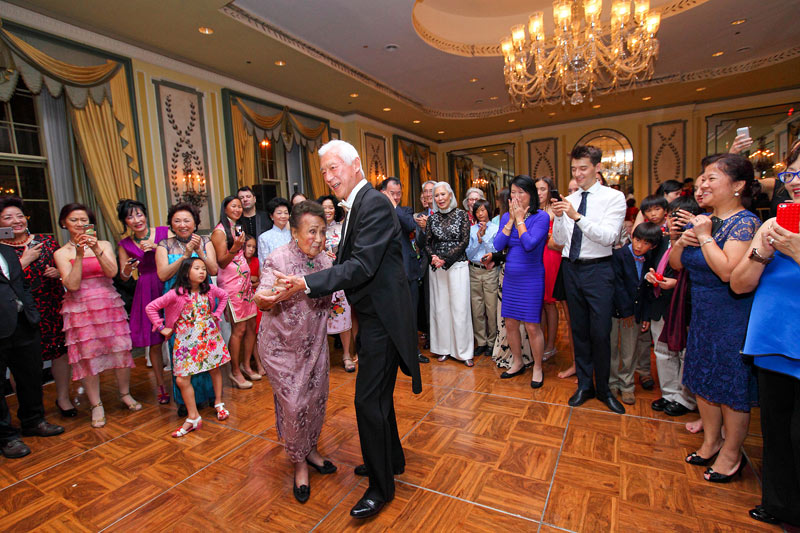 Mrs. Koo was one of the first female graduates from Shanghai’s Fudan University. When she was young, a fortune teller predicted that she would have an incredibly extraordinary life. Those words came true. She went through lots of unexpected twists and turns most women wouldn’t even dare dream of, starting with leaving China as a diplomat’s wife.

She was married twice. During World War II, the Japanese killed her first husband, forcing her to raise three daughters on her own. Then she brought them to New York and took a job with the United Nations. Later in New York, she fell in love with her first husband’s former boss Wellington Koo(1888-1985), one of the most distinguished Chinese diplomats of the 20th century. They married when she was 54 and he was 71. It was his fourth marriage.

One of Mrs. Koo’s Mandarin dresses is in Ms. Song’s collection. One of Mrs. Koo’s Mandarin dresses

With a lush green background and hot pink floral pattern, this dress really can represent Mrs. Koo’s evergreen life! If you like the vibrant color combination of pink and green, here is a similar design.

Speaking of bright colors, teal is a lovely one. It’s a shade between blue and green, and it goes well with both of those colors. The watercolor patterned dress once belonged to Ms. Chao Chi-hsia(1912-2000), widely known as the fourth Miss Zhao. The love of her life, Chang Hsueh-Liang(1901-2001), was put under house arrest after rebelling against Chiang Kai-Shek in 1936. She stayed with him and gave up her own freedom for him when his wife had to go to America for medical treatments. Eventually, Chang divorced his wife and married her.

While these legendary ladies are no longer in their prime, their Mandarin dresses keep records of the past glory. Wouldn’t you want some magnificent Mandarin dresses to immortalize your best years, too?